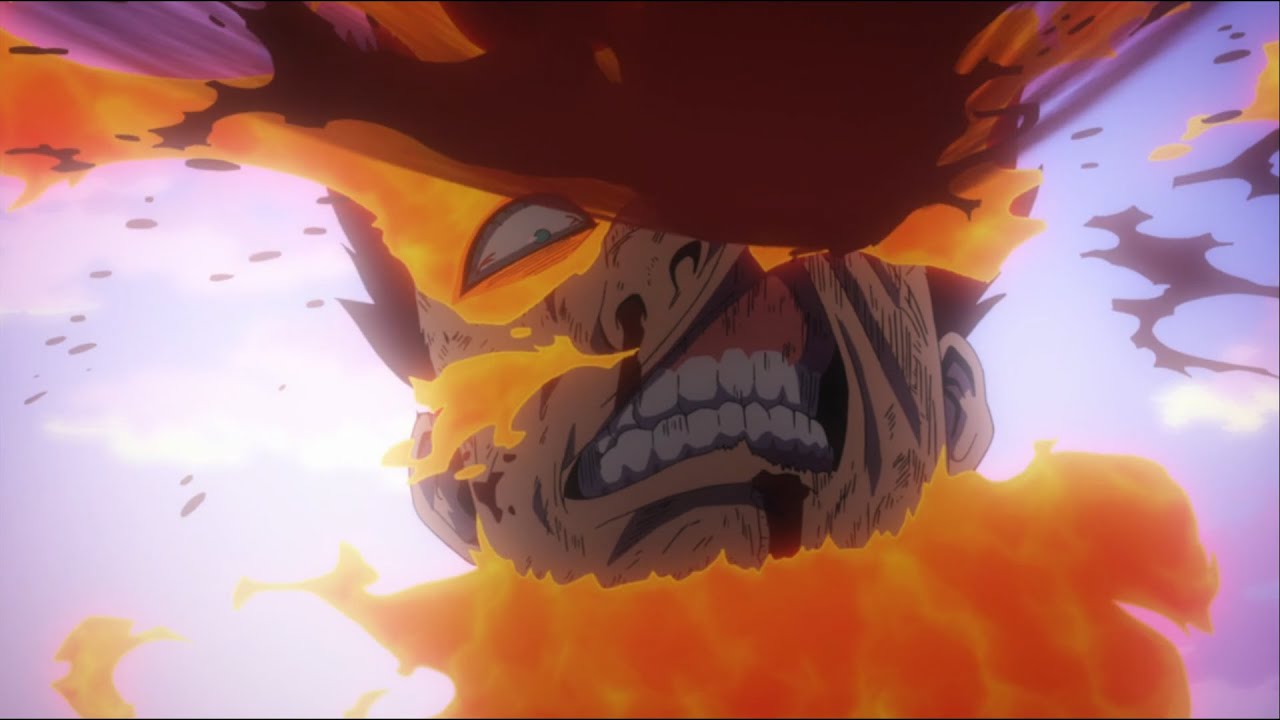 
My Hero Academia once again sets the bar and raises it even higher with one of the HOTTEST season finales in My Hero Academia history! Setting the stage for what’s to be an intense fifth season.

As we witnessed in last week’s penultimate episode, Endeavor was officially named the Number One Hero. Coming in second is the young fan-favorite Hawks. By the end of the episode, we saw what is to become a nice buddy cop style team-up between Endeavor and Hawks.

The duo was attacked by High End and set the stage for today’s showdown in the finale between Endeavor and this new Nomu. Thus officially marking Endeavor’s first real test as the Number One Hero.

Before we get in on all the action we get to share an intimate moment between Todoroki’s siblings and his mother. Todoroki’s brother expresses his resentments towards Endeavor for what he’s done to them, Todoroki and their mother. As well as what seems to be his distaste for him becoming the Number One Hero. Understandable, right? Until Todoroki’s mother reveals that Endeavor has been visiting quite frequently.

Revealing that Endeavor has been trying to find ways to right his wrongs all this time. Although we haven’t gotten to see any of that happen on screen. It is nice to know that Endeavor isn’t the cold-hearted bastard he’s portrayed himself to be.

Has he done wrong? Yes. Does that mean he doesn’t or didn’t love his wife and kids? Not entirely. Throughout all of his interactions with Todoroki, we see that even though he is stern with him, he deeply cares for him. Even going as far as telling Todoroki that he will become a father that he[Todoroki] will be proud of having.

It’s a complicated relationship, to say the least, but Todoroki is the closest thing he has to family at this point as I mentioned above, Endeavor has been trying to find the ways to right his wrongs.

The beautiful thing about that is that despite not really seeing how Endeavor goes about righting his wrongs (to a degree, most of it is seen in minor interactions and gestures with Todoroki). We get that battle of inner conflict in the form of his battle with High End. It’s a grueling battle too!

The whole world is watching so there’s no room for failure. More so when Endeavor’s entire journey up until this point was to surpass All Might and become the Number One Hero. He’s reached that goal. Now, can he overcome the insurmountable odds and pressure that have just presented themselves in front of him?

Despite Endeavor’s power set, he is heavily outpaced in both power and speed. And while his moves are hard-hitting and nearly fatal. High End still manages to come back at him even harder. As the battle prolongs, Endeavor realizes how hard it will be to overcome this new enemy.

To make matters even worse, as I mentioned above, the entire world is watching. His children are watching this battle happen live, the U.A. students are also watching this live; as well as Todoroki. Who is visibly shaken to his core from watching his father take such a beating.

Despite Endeavor’s best efforts, he is still falling short. Defeat seems imminent. Almost a guarantee. Although their relationship is severely complicated, Todoroki has always shown how much his father means to him. This episode solidified that even more.

It’s one of the main reasons I love Todoroki so much as a character. It’s not just the cool character design and his tremendous power set. But the character’s history and what has happened to him in the past, which has molded him into the teenager he is today is what really drew me to the character since day one.

But I don’t want to forget about Hawks. He too lent a great hand in Endeavor’s victory against High End. We learn that Hawks isn’t much help against a power-based enemy like High End, but speed will be a great ally for Endeavor who lacks that speed. It’s a great team-up and it was great seeing Hawks in action. We got to see a bit more of what he can do with his Fierce Wings Quirk, I just want to see how he can further help not just Endeavor, but other heroes around him with his quirk.

Throughout my review last week, I kept mentioning how the series was starting to connect to the bigger picture that was My Hero Academia: Heroes Rising (you can check out that review right here). One of the many things I mentioned was Endeavor’s scar which is first seen in the Heroes Rising film. In today’s finale, we finally see how Endeavor earns that scar.

I say earned because scars tell a story. And if you’re lucky enough to just walk away with a scar, you typically tend to wear that scar proudly. All Might does that to a degree in the first or second episode of My Hero Academia Season One. When he shows his abdominal scar to Deku, which he received during a battle with All For One.

With the help of Hawks, Endeavor manages to bring High End to a new height in order to put an end to this fight once and for all. It was a touching moment because during those final moments we see his older children reflect on him a bit more. Fuyumi and Natsuo express their feelings once again for Endeavor.

Natsuo one again expresses his resentments towards Endeavor and suggests he gives up in the fight he’s losing just like he gave up on his family to pursue becoming the Number One Hero. But Fuyumi reveals that he’s never given up on their family. His stubbornness is what’s gotten him to where he’s at now despite his ways in the past.

It’s really a testament to how much of an effect Endeavor has on his wife and children despite his demeanor. It also shows how strong of a will Endeavor has. Something that Hawks also points out during those final moments of this intense battle.

We were given a nice flashback to a young Hawks admiring a younger Endeavor who was simply looking to surpass the Symbol of Peace, All Might. Something other Pro Heroes did not bother tasking themselves with. Simply because they knew, it couldn’t be done. But Endeavor did. The new Number One Hero has emerged victorious.

As the dust settles we transition to a scene with Deku sleeping in his dorm room. Deku awakens in what looks like to be a dream where he is now in the presence of all the former wielder of One For All, with the exception of All Might. Presumably, because he is still alive.

What we can gather from this brief scene is that we will most likely see this scene fully fleshed out and the birth of One For All, all in Season 5. Most importantly though, we see All For One’s brother, the first wielder of One For All, reach back out to Deku as Deku reaches out to him. “You’re the ninth” he says to Deku and as they connect, it seems like Deku unwillingly unleashes an attack while in his sleep.

The cliffhanger leaves us with many questions but does confirm and announce that My Hero Academia will indeed be back for a fifth season. Things were calm for a while in My Hero Academia but the League of Villains have unleashed their first of many newly created Nomus upon the world.

With the full introduction of Hawks and Mirko, things will get very interesting in this next season and I cannot wait to see what’s in store!

Make sure to keep it locked right here at The Nerdy Basement for all your anime news, updates and reviews!