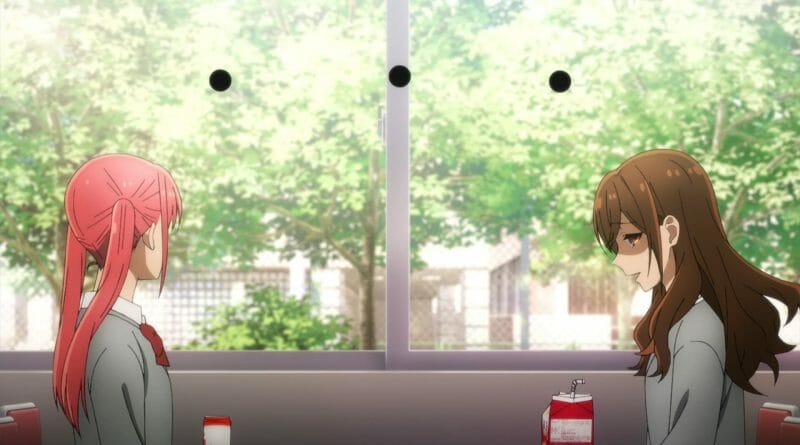 
Horimiya is back at it again with another charged episode.

There were some moments that were a bit hit or miss but overall it captured the bittersweet emotions of youth quite well. This time we focus on Miyamura as we see him in different stages of adolescence. Here we learn why he is introverted and keeps his distance from others. It was hard to watch the bullying and isolation that Miyamura experienced. In the flashbacks, the colors are muted and faces are left blank, cementing his feelings of isolation. We see him pierce his ears by himself as a means of feeling something. Eventually, we see him meet Hori who doesn’t treat him as coldly or apprehensively as his other classmates. It was a small interaction but meaningful nonetheless.

Miyamura still clearly has anxiety around whether or not he really belongs in their friend group but through both nonverbal and verbal confirmation Miyamura begins to feel more confident of his place. These were the best moments of the episode, capturing Miyamura’s loneliness and anxieties while showing his growth.

The weaker parts of the episode include Remi and Hori’s interaction and Miyamura’s fight with Toru. Remi, to put it lightly, is already not much of a likable character, despite marketing her as such. She’s even less likable in this episode. One morning Hori comes into the cafeteria and Remi asks her if Miyamura is her boyfriend and whether or not she can “have him”. It’s later revealed to be a joke but it’s not funny, it felt like a joke a mean girl would make. It was nice seeing Hori show some agency with Miyamura but it could have been executed better.

The second point of weakness for this episode lies in Miyamura and Toru’s conflict. Once again Toru confronts Miyamura about Hori’s feelings for him and again he dismisses him. This is aptly timed given the fact that in a scene before this Miyamura and Hori share a sly confession. Miyamura probably dismissed Toru to protect himself since he’s used to keeping his feelings to himself but it did come across as a frustrating reaction. It makes sense that Toru was frustrated but then they get into an actual physical altercation and it’s not as endearing. The audience is supposed to laugh at the fight between the two but it’s not something you’d normally laugh at.

There was one more moment that was a bit problematic in this episode. When they are all looking to see what class they’re in, Toru proclaims that Miyamura and he are in the same class again. He accredits this to the power of love, which is a genuinely funny thing to say. But Miyamura seems creeped out by it and two girls who look disgusted say something along the lines of “but they’re both guys.” It’s an odd remark to make and seemed out of place.

This episode could have been better but there were some solid aspects that mostly make up for the weaker parts. It seems like the next episode is gearing up for a real confession so hopefully some of the more lacking aspects of the plot are left behind.

Horimiya is streaming now on Funimaiton.