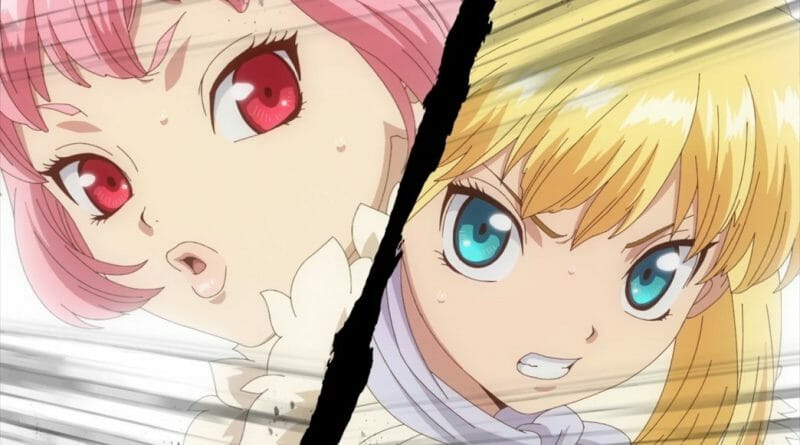 
Dr. Stone Continues To Prove and Cement Its Early Legacy of Being a Must-Watch Anime Series Week to Week

When humanity is mysteriously reverted back to the Stone Ages, the least of your worries is whether or not your hotline will be blinging or not. Picking up after our season premiere episode, episode two of Dr. Stone Season 2 which is adapting the manga’s Stone Wars arc, finds our heroes from the Kingdom of Science attempting to capture Tsukasa’s scout Homura, who’s been keeping tabs on Senku and his kingdom for the past year.

In this episode, we learn a little more about Homura and her past as a gymnast during her days in high school. This comes into play when Kohaku is trying to capture her but Homura’s gymnastics background comes into play and not only does she avoid being killed by Kohaku she avoids her capture altogether. That’s until Senku gets his hands on her. Despite their best efforts Homura still manages to get away and informs the Kingdom of Science that she’s fully aware of who is every citizen of this village.

In doing so, Homura realizes that Gen, Magma, and Chrome are not present and must be on their way to Tsukasa and sets off to find them. Although she manages to get away, her slipping away was all part of Senku’s plan. He reveals that he covered her in the blue gem dust (which only illuminates when the sun rises), thus allowing them to track her down using his new invention, the black light.

Of course in typical Senku fashion, we get the amazing scientific formula to create a black light from scratch (we also learn how to make a flare) and how the UV rays it generates can be used for certain things. One of them is tracking down Homura. Things switch over to Gen, Magma, and Chrome as they make their way to Tsukasa’s hideout. Gen realizes that Homura has caught on to the plan and has caught up to them. Using morse code, Gen keeps Senku informed of Homura’s location up until they reach the outskirts of Tsukasa’s hideout.

There the team contemplates killing the humans who have not yet been broken out on petrification. Magma wants to take out the enemy before the enemy can take them out but after being enticed by Gen, he stops Magma from “killing innocents”. Although it seems that the person Gen stopped Magma from killing has some kind of connection to him which would explain why Gen stops him. At the moment that neither here nor there but we do get the introduction of a cool new character with super hearing.

He’s essentially Dr. Stone’s version of Hawkeye or Green Arrow with just super hearing. I would go the former since Hawkeye has a hearing impediment but once again that’s neither here nor there and in all honestly mostly unimportant when it comes to Dr. Stone so I digress.

When it’s all said and done, Homura ends up being captured by Kohaku and Senku’s team while Gen, Magma, and Chrome successfully manage to get the phone installed for Taiju and Yuzuriha to communicate with Senku. This moment damn near brought a tear to my eye because it meant so much for these friends to finally hear from each for after so long.

I’m just like Senku I can almost cry but I held back. Who says anime can’t make you cry? Moments like these in Dr. Stone is what makes the anime such a standout for me, and that’s outside of the show being such a unique story and how educational it really is when it comes to using real-world science to move the plot forward. It’s genius.

Dr. Stone: Stone Wars is streaming now on Crunchyroll! Make sure to catch a brand new episode later this week!