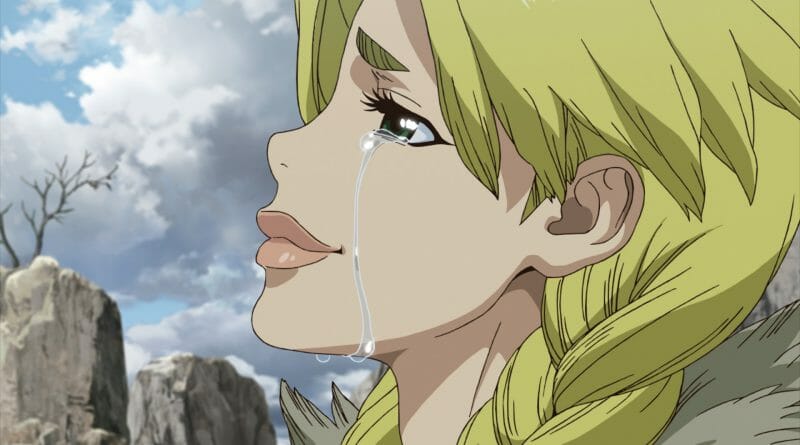 
This week’s episode of Dr. Stone Finds Senku and Taiju turn a member of Tsukasa’s army into an ally

After successfully getting a phone line up and running outside Tsukasa’s base during last week’s episode of Dr. Stone. Senku, Taiju, and Yuzuriha reconnect after a year of not speaking or seeking each other. An emotional reconnection to say the least. As Taiju and Yuzuriha talk to Senku through the phone, they are being watched by Nikki, one of Tsukasa’s guards. Nikki’s job is to keep an eye on Taiju and Yuzuriha to make sure they aren’t doing anything fishy while visiting Senku’s grave.

Nikki grows suspicious of Taiju and Yuzuriha as they can’t contain their emotion while speaking to Senku. On the other end of the line, we have Senku trying to calm them down so he can explain to them the plan they are trying to complete. Without going into many details Senku convinces Taiju and Yuzuriha to play along with this plan no matter how ridiculous it sounds. To the surprise of everyone in the village, especially Kohaku, they realize how despite being separated for nearly a year, Senku’s friends still trust him and believe in him.

But in order to fully make this plan work, Senku needs Gen to return to the village. Unfortunately, Gen, Magma, and Chrome are still trying to get away from Ukyo. The archer the team ran into in last week’s episode, who also has super hearing. Ukyo has the group cornered and they need to get Gen back to the village otherwise the plan will fail and blood will be shed. Chrome uses his knowledge of science to come up with a proper distraction in order to use Magma and himself as bait to distract Ukyo and give Gen enough time to make it back to the village.

Gen manages to make it back to the village in time and immediately has to go to work. Taiju has convinced Nikki to come to the phone to talk to Senku who is using Gen to impersonate Lillian Weinberg. Turns out that Nikki was a huge fan of Lillian Weinberg and starts to question the authenticity of this message Gen and Senku are trying to get across.

Needing further convincing, Nikki asks Gen and Senku some questions that only Lillian will know about. Despite answering both questions correctly, Nikki is not convinced that she is indeed speaking to Lillian. Noticing that Nikki has caught on to their lie, Senku ops to simply playing Lillian’s one song.

While hearing this song we get a flashback to Nikki’s life in high school before the world’s petrification. She reveals that listening to Lillian’s music actually saved her and helped her get through the tough times she dealt with in school due to her bruteness. Nikki comes to the sad realization that Lillian is no longer part of this world but that her music still lives on. Thus realizing that she’s not really speaking to Lillian either.

Despite that realization, Nikki asks if Senku is able to bring back the rest of Lillian’s music to which he tells her “no” due to those old records being turned to dust thousands of years ago. But Senku promises her that he will use the power of science to preserve the one song they do have in their possession. Senku reveals the rest of his plan to Nikki and she accepts to work alongside him in order to convince more of Tsukasa’s troops to switch sides.

While it seems like not much happens in this episode and while it also seems like we’re taking a while to get to the actual war between the Nation of Science and the Tsukasa Empire, getting these pieces of the puzzle moved in the right direction will dictate heavily how the tides will turn during this Stone War Arc.

At the end of the day Senku wants to defeat Tsukasa without bloodshed, while Tsukasa is willing to kill anyone to make sure his goal is accomplished. And I’m sure he’ll be willing to kill Senku again if he needs to since he didn’t hesitate to kill him back in season one.