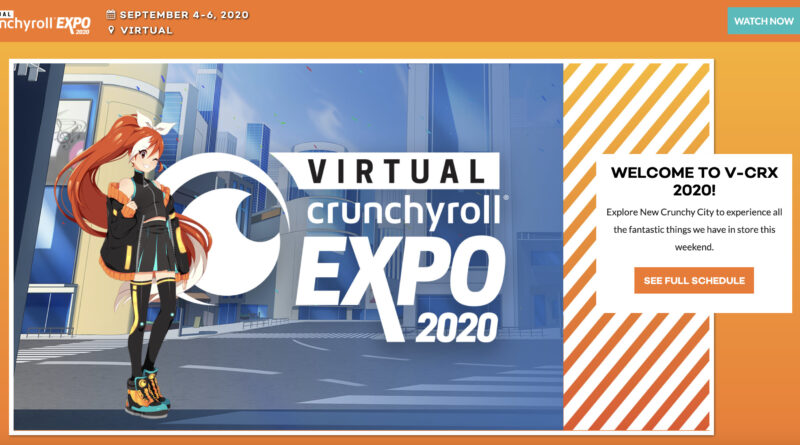 VCRX included an overabundance of incredible engagement from the global anime community with fans from around the world tuning in for all the action, including attendees from Canada, across Latin America, the U.K, Australia, Germany, France, and Japan. Huge programming announcements including “Shenmue,” a Crunchyroll and Adult Swim Production based on the beloved SEGA video game franchise, alongside the announcement of “To Your Eternity” and new seasons of “Dr. STONE,” “The Rising of the Shield Hero,” “How NOT to Summon a Demon Lord: Omega” and the first season of “Dr. Ramune -Mysterious Disease Specialist-” and so much more, all coming to Crunchyroll this later this year and early next year. The upcoming Fall and Winter anime seasons are stacked, to say the least.

More than 85 panels including the creative staff and voice actors behind a mix of series including Crunchyroll Originals “Onyx Equinox,” “Noblesse,” “The God of High School,” “EX-ARM,” “So I’m a Spider, So What?” and “TONIKAWA: Over The Moon For You,” alongside “Rent-a-Girlfriend,” “The Rising of the Shield Hero,” and “Dr. STONE.” Nearly 210 guests and panelists including legendary horror manga artist Junji Ito for a discussion about his beloved cats Yon & Mu, voice actor Soma Saito for a preview of his upcoming series “EX-ARM”, Arthell Isom, CEO of D’ART Shtajio, the first Black-owned animation studio in Japan, a history of anime in Latin America featuring Crunchyroll’s Mexico community leads and a celebration of the art of Japanese vegetable carving.

The fun didn’t stop there. Fans in virtual attendance received special shout-outs from K-Pop stars including CIX, Stray Kids, J-JUN, and OH MY GIRL and Japanese EDM artist KSUKE, alongside musical performances by Myth & Roid, a Hatsune Miku Symphony with the Tokyo Philharmonic, and the exclusive world premiere of “The Rising of the Shield Hero” concert with composer Kevin Penkin (a must-see concert if you missed it as I happened live…don’t worry you catch it on-demand…details below).

Immersive experiences including the “Onyx Equinox” scavenger hunt, live sketches from the character designer of the Crunchyroll Original “Tower of God,” a MAPPA gallery tour with behind-the-scenes commentary from creative staff including Sunghoo Park (director “The God of High School,” “JUJUTSU KAISEN”), the Yuzu’s Cat Cafe featuring a 24/7 livestream of adorable and adoptable kittens, and a celebrity fan exhibit of anime-inspired art.

An international cosplay competition featuring more than 30 participants. The best in show winner was awarded to Jaqueline Fernandes, a cosplayer located in Brazil. The show was hosted by Vampy Bit Me and Mario Bueno, with Rock M. Sakura, Creature Of Habit, GSTQ Fashions, and Kamui Cosplay as judges. You can check out our exclusive interviews with Vampy Bit Me and Mario Bueno right here.

World and domestic U.S. premieres of “GIBIATE” episode 9, “One Piece: Episode of Chopper – The Miracle Winter Cherry Blossom,” and a sneak peek of five minutes of the Crunchyroll Originals series “Noblesse. Major merchandise news including a special limited edition book for “The Rising of the Shield Hero” featuring more than 100 pages of original art available now for pre-order, a home video partnership with Sentai Filmworks including “Food Wars! The Fourth Plate,” “Ascendance of a Bookworm,” “Granbelm,” and “World Trigger” and the announcement of the Crunchyroll Crate and the Limited Edition Mobile Suit Gundam Life Crate, available for pre-order now from Crunchyroll and Loot Crate.

Although happening virtually for the first time ever, Virtual Crunchyroll Expo didn’t shy away from delivering some massive news, panels, anime marathons, and live entertainment to keep fans locked in over Labor Day Weekend. While the future is uncertain, we can only hope that the world is healthy enough to make Crunchyroll Expo a reality next year. If not, here’s to another Virtual Crunchyroll Expo that is sure to bring forth even bigger news announcements, panels, guests and so much more.