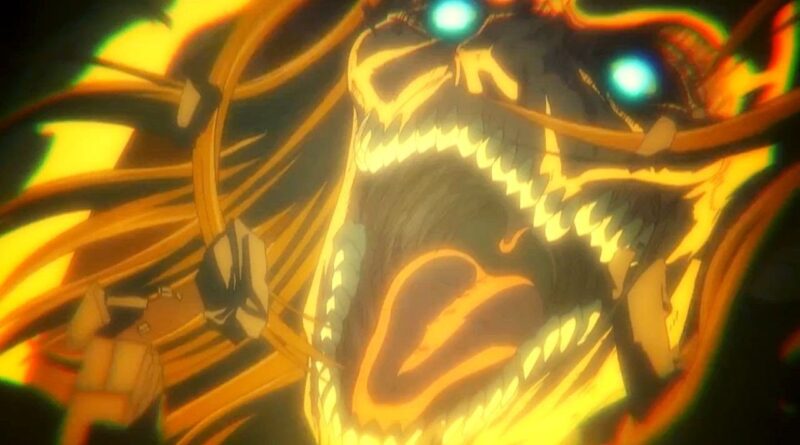 
Attack on Titan’s Latest Episode Aimed To Set The Record Straight and As The Truth Starts To Be Revealed, A Declaration of War Has Been Made!

It took two weeks for Attack on Titan to return but the wait was worthwhile. In episode 63 we were introduced to Willy Tybur and the Tybur Family and came to learn that the Tybur family not only are in possession of the Warhammer Titan, but are also a central figure of Marley’s government. As Willy Tybur set the stage for a major announcement, Falco reunited former friends turned enemies, Reiner Braun and Eren Jaeger.

Episode 64 wastes little time and picks up exactly where episode 63 left off. Shocked to see Eren inside of Marley, Reiner is taken aback by this. Eren calmly asks Reiner to sit down so that they hear the truth about Paradis Island, King Fritz, and Marley. Falco feels his job is complete at this point and tries to leave, but Eren suggests that he stays in order to listen to the truths that are about to be revealed.

As Willy Tybur gets ready to take the center stage we come across Reiner’s mother and Annie’s father. In a small exchange, we learn that Bertholdt’s father has passed away. Although unknown what’s the reasoning for his death is, we know that he died praising his son’s sacrifice for the city of Marley. As we all know, Bertholdt was killed last season and Armin became the new Colossal Titan.

As the show begins, Tybur reveals how the combination of Titans and the Eldian Empire used Titans to slaughter countless lives, and in turn that is what became humanity’s history (being slaughtered by Titans). When the Eldian Empire ran out of enemies they began fighting each other thus igniting The Great Titan War. Marley used this to their advantage to gain victory over the Eldian Empire through their hero Helos who tricked the Eldian Empire into killing one another.

Marley then joins the Tybur Family who has money, power, and the Hammer Titan in their arsenal and forced King Fritz to retreat to Paradis Island. Tybur confirms that King Fritz has tens of millions of Colossal Titans on Paradis Island (these Colossal Titans were used to create the walls in which Eren is from). Tybur thinks this plan has been a bluff this entire time as King Fritz never unleashed his attack on Marley.

Marley knowing about King Fritz’s massive Colossal Titan army, in order to avoid the pending attack, sent four Titans to Paradis Island to recover the Founding Titan but as we all know were ultimately defeated with Reiner the Armored Titan being the sole survivor of the group and being the only one who was able to return to Marley. Although he didn’t come back with the Founding Titan (Eren) he came back with Ymir who at the time was in possession of the Jaw Titan since she ate Marcel before the attack on the walls.

Tybur reveals after that the Tyburs inherited the Hammer Titan, they’ve learned the truth through the memories the Hammer Titan had, that it was neither Helos nor the Tyburs who ended The Great Titan War. In fact, the one who actually ended the fighting and saved the world was indeed King Fritz. Who was always painted as a coward for retreating to the walls and not wanting to engage in war.

In reality, King Fritz was filled with anguish due to the Eldian Empire’s tainted history, he grew tired of the fighting and was pained by the oppression of Marley. Once he came in possession of the Founding Titan, King Fritz along with the Tybur family fabricated the Marleyan hero, Helos as the savior of the war.

Fritz moved as many Eldians as possible to Paradis Island and built the walls. He set the rule that if Paradis Island was ever attacked he would unleash thousands of Titans to trample the world into nothingness as revenge for the attack. Although not his true intentions, Fritz vowed to renounce war in order to maintain peace and so his ideology would be inherited.

With his ideology being passed down, his herd of Titans was never unleashed upon the world despite the attack from the start of the series. Karl Fritz maintained peace. But he knew that if Marley grew strong or came to take the powers of the Founding Titan or take his life, he would accept the consequences as he felt that the sins of the Eldians were too severe and can never be atoned for.

“However, until that day of retribution, let me savor a buried paradise free of conflict within the walls. That’s all I ask of you”

In exchange for safety, the Tybur family joined up with Karl Fritz and sold out the Eldians to Marley. Willy reveals that he and his family are simply traitors living lavishly in falsely earned honor. Knowing that their world is in great peril he has used this as his reasoning to keep up the lies in exchange for their safety. In revealing the truth to essentially the world, Willy feels like this is atonement for his sins and betrayal.

Willy reveals that an “uprising” took place on Paradis Island which isn’t necessarily true and that Fritz’s peace was undermined by Eren who stole the powers of the Founding Titan and declares him the enemy. Willy Tybur reiterates that the threat of Paradis Island is and was in fact the millions of Colossal Titans, not the people living within the walls. But now, seeing how Eren now has the powers of the Founding Titan, Marley/Tybur feel that he can unleash the massive horde of Colossal Titans at any given time.

As the truth is revealed, and it starts setting in, the citizens of Marley and those from the outside nations who are visiting start questioning the reality of the lies they’ve been told all this time. Especially why Marley always considered Paradis Island a threat.

Tybur reveals that he has tainted his bloodline and that he wished more than anyone that the Eldians as a whole were wiped out but he doesn’t want to die. So he urges the members of the surrounding nations who are in the crowd to join together to face the new enemy, Eren Jaeger.

Earlier in the episode we see Armin in the disguise of a Marleyan soldier, ask the warriors to leave the area as their presence has requested elsewhere. Pieck recognizes Armin but can’t quite identify him. Armin successfully gets Zeke to move elsewhere giving him the perfect chance to trap Pieck and Galliard and prevent them from transforming into Titans.

Back to Eren and Reiner, Falco starts putting two and two together with the more he hears about the story being told by Tybur and Eren. Falco feels betrayed because he respected Eren and Eren tricked him and used him to his advantage. In disbelief, Falco still can’t fathom being used by Eren in order to send intel back to his comrades, the Scouts. Going by Eren’s successful infiltration along with Armin’s, we can only assume that the rest of the crew, Mikasa, Connie, Levi, and the others are blending in somewhere within Marley.

Eren understands that Reiner was trying to save the world but now realizes that to some degree he is the bad guy now and he has the literal power to destroy the world if he wanted to but to him, Reiner, and the rest of Marley are still the bad guys in his eyes. As the conversation keeps developing.

Falco learns that Reiner broke the walls of Paradis Island which led to Eren’s mom being eaten by the Smiling Titan. Reiner reveals that this was just a ploy to see how King Fritz would react to the breach of peace but in the process retake the Founding Titan and save the world in order to prevent the attack Fritz warned he would unleash.

The crazy part about all of this is that Eren literally becomes what Reiner was to him in the sense that he has become one of them. He lived and blended in the same way Reiner did with them. He slept under the same roof, they are the same food, and essentially, just like Bertholdt and Reiner, built bonds with these people. Yeah, there are some good bad people in Marley but he also realizes that there are some good people there too.

Reiner then reveals to Eren that once Marcel died, Annie and Bertholdt wanted to return to Marley but he insisted and convinced them to continue pushing forward for his personal gain all cause he wanted was to be a hero and wanted the respect of the Marleyans. As we’ve been learning throughout this season.

Reiner has been filled with guilt and he’s tired of it all and tired of living with himself knowing he’s done more harm than good. Hence why he’s tried to kill himself before. Despite all that Eren reassures Reiner that he will keep pushing forward and will destroy his enemies. As Tybur officially declares war on Paradis Island, Eren emerges as the Attack Titan and starts to wreak havoc.

The beautiful thing about this exchange between Reiner and Eren before he turns into a Titan was the parallel of these scenes when Reiner and Bertholdt first revealed themselves to be the Armored and Colossal Titans. Another thing to highlight is that Eren seems to have gained full control over his Titan powers. This was first hinted at when Falco notices that Eren’s hand was bleeding.

We as the viewers know that whenever a Titan user has a self-inflicted wound, they transform into a Titan, but at this moment Eren didn’t. Additionally, the fact that Eren was able to regrow his leg at will as opposed to waiting until he was fully healed and for his limb to regrow on its own. Unfortunately, we don’t see any of that development in the anime, and it’s probably in the manga but either way, it’s good to see Eren having full control over his Titan powers. More so, his character development and how he’s gone from overly emotional and erratic to calm, collected, and methodical.