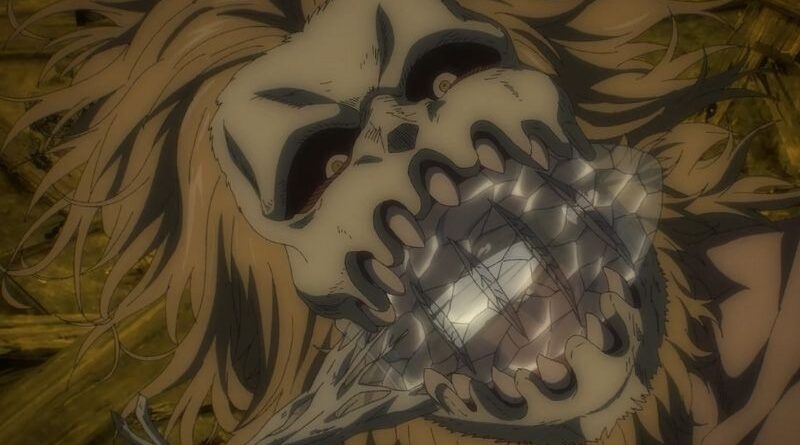 
Attack on Titan Ep. 66 Brought Forth An Onslaught from Eren and the Scouts Regiment. Here are our recap and some of the biggest moments of this week’s episode!

Eren vs the War Hammer Titan was just the tip of the iceberg when it comes to what happens in Marley after Willy Tybur’s declaration of war on the Eldian Empire and Paradis Island, and more specifically, Eren Jaeger. Eren is still trying to eat the War Hammer Titan who is controlled by Willy Tybur’s sister Lara Tybur. While doing this Eren and the Scouts are still trying to fight off Galliard, the Jaw Titan.

We get a nice 1-on-1 battle between Eren and Galliard in which he gets the best of Eren due to his speed. But Eren is patient, methodical, and overly calculated. He quickly gains the upper hand despite Pieck, the Cart Titan, and Zeke, the Beast Titan laying waste to a good portion of the Scouts Regiment. It’s a blood-soaked episode, to say the least.

There are a few standout moments with one of them being Zeke declaring that Eren Jaeger is not his enemy while declaring a rematch between him and Levi. Who came close to killing him back in Attack on Titan Season 3. Another standout moment was Armin’s anime debut as the Colossal Titan. Laying waste to Marley’s entire naval port leaving nothing but dead bodies and a world turned to red and burning ash. There is a moment of reflection from Armin here as he looks at the damage he’s caused, and Armin being Armin, he shows sympathy.

Reflecting on the memories he inherited from Bertholdt, he now sees first hand all the destruction he caused as the previous Colossal Titan. Although praised by Hange, who asks Armin if he’s been possessed by Erwin’s ghost due to how risky this move in the plan was. Armin still shows some sort of empathy about the destruction they’re all causing.

I keep mentioning in my reviews and on our anime podcast that this season has really shown how easily the scales of morality teeter back and forth due to the decisions each person in this series makes. Armin is a clear example of that other than Eren. While Armin is doing what he must, showing that soft side of himself he’s shown throughout the entire Attack on Titan series just shows how conflicting these decisions really are.

After getting through the Cart Titan, Pieck is nearly killed by the Scouts. Falco foolishly tries to save her but as he is about to be hit with the missile, she uses her Titan steam to blow him out of the way. Although Reiner is down, he is not out. Even though it’s clear that he no longer wants part of this war he’s been fighting since he was a child.

It’s clear that this war has taken a much deeper toll on him and rightfully so. Throughout this current season of Attack on Titan we’ve been giving enough backstory to Reiner in order for us to understand some, if not all of his actions since the beginning of the series. At this point, he just looks and feels defeated and is ready to move on. Just as Eren is about to deal the killing blow to Galliard, Reiner once again emerges as the Armored Titan. Although he’s half-cocked it seems like we’re about to get a nice rematch between Eren and Reiner.

Each and every week Attack on Titan just elevates itself further and further into anime greatness. Making it one of the pillars of the anime world within the last decade. As a now manga reader, I know what’s to come later on and its great waiting to see it animated each week as opposed to lingering in mystery and anxiety until the next episode releases.

As this final season of Attack on Titan progresses, the implications and the actual truths will only deepen and I cannot wait to further see it unfold in the anime and see how anime-only viewers react to what’s to come!

Attack on Titan: The Final Season is streaming now on Hulu, Funimation and Crunchyroll.