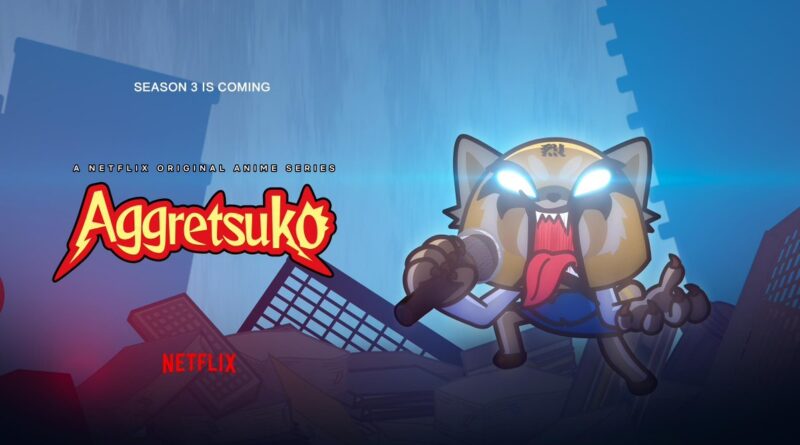 Netflix has plenty of anime in its catalog but without question, one of its biggest properties on that list is Aggretsuko. Based on the mascot created for Sanrio, the show has rocked its way into audiences’ minds thanks to its surprisingly relatable situations, off-kilter humor, cutesy art style, and easily consumable runtime at 15 minutes per episode.

With season 3 of Aggretsuko releasing on August 27th, director Rarecho tries to take the show in a somewhat different direction. While most of the show’s elements remain the same, some brand-new features rise to create new adventures that bring the characters out of their comfort zone. Though they mostly work for me, there are aspects of this season that rubbed me the wrong way, whether for personal reasons or just being questionable in general. Nevertheless, Aggretsuko continues its streak of delivering situations that are weirdly relatable, outlandish, yet enjoyable all the same.

Season 3 begins with Retsuko struggling with her breakup with Tadano that occurred at the end of Season 2. In trying to fix her pain with compulsive spending, not only does she lose money that she has saved up, she ends up hitting a man’s car! Rather than taking the incident to law enforcement, the man in question, Hyodo, strikes a deal with Retsuko: If she works as an accountant for him, then she can work off her debt to him. Upon accepting, she discovers that Hyodo will have her be an accountant for his underground idol group, and as she learns how to live the life of an idol, she discovers the importance of passion projects, self-growth, and not being afraid to face the world in hard times.

Not much can be said in regards to the animation and art style. It remains consistently adorable and memorable, just as it has been since the show’s inception. The unique expressions of the mainstay characters remain in use throughout the season, and they never feel stale whenever they show up onscreen. No two expressions are the same between characters (unless intended for comedic effect), and it is clear that the studio behind Aggretsuko, Fanworks, has mastered the way they animate Retsuko and everyone around her.

The way everything sounds also remains top-notch. The background music that has been used since Season 1 still gets used in Season 3, but each track never feels dull. They work to capture every mood in the show and get the job done even if they remain familiar. Voice work on the show is also as commendable as ever, with everyone in the English dub bringing out their best comedic chops for this season. Erica Mendez (Love Live!, KonoSuba, Fire Emblem: Three Houses) continues to emanate tired determination as Retsuko, delivering a performance that once again captures how hard it can be as a 20-something in a world that seems like it’s conspiring against you.

While the other main and supporting characters we know and love remain with excellent voice acting, the main stars of the show are the new characters. Hyodo, voiced by SungWon Cho, aka ProZD (Anime Crimes Division, Monster Prom) is a very enjoyable new figure, his hardened and intimidating exterior often giving way to a passionate and aloof interior once he meets Retsuko. Cho manages to get Hyodo’s mannerisms across seamlessly, whether he is trying to crack a joke or doubling down and focusing on his business. He is easily the most memorable of the new characters introduced this season, and that is mainly due to Cho’s acting chops.

That is not to say that the rest of the new characters are not enjoyable; in fact, the opposite is true. All three members of the idol group introduced, OTM Girls, make themselves prominent in how they act, playing off Retsuko and Hyodo in ways that can easily have you laughing in your seat. Manaka, the leader of the group, is a joy to watch with her duality of being an energetic and encouraging person on stage and a dive off stage. Regardless of which side she’s on, she is a great character to watch, since you’re guaranteed to be drawn in by her.

Her sidekicks, Migi and Hidarin, are just as fun; even though they may be one-note, they fit their purposes as comic reliefs well. Finally, Inui, the new addition from Retsuko’s workplace fits well among those she interacts with, her gentle demeanor and chipper personality making her an instant standout and one of my personal favorite characters in the show.

Though these new characters are enjoyable to watch, their existence comes at a cost. Characters who were previously bigger in previous seasons are either reduced to bit parts or absent entirely, which can feel jarring since some of the said characters were key components of previous storylines. While this did lead to a new story that existed outside of the boundaries of places we already know, there is an oddly-shaped hole that these characters cannot fill.

As for the story this season, I found it mostly enjoyable. For the previous two seasons, we had a main storyline that focused on Retsuko’s attempts at finding love. To see the show branching out and letting Retsuko try new things was a breath of fresh air, something that the show is mostly bolstered by. The side plots this season were equally fun, not taking up too much screentime and fitting within the characters’ personalities.

There are two main problems with it though; first, how the season uses the aggressive side of Retsuko. For a part of the show that is so essential to its premise, it barely gets utilized this season. Although this did allow for more plot to develop, it feels like the show was forgetting what it was. The few times it does appear are incredibly memorable, and the songs Retsuko belts out while in this mood are equally hilarious; I just wanted more, since those kinds of scenes were my favorite in the previous seasons.

Secondly, the season’s ending feels… out of place. Without going into too much detail, the season feels as if it veers into completely uncharted territory with barely any setup whatsoever. While it does pull you in at first, when I thought about the way Aggretsuko handled the shift in tone… it’s not very good. The themes it tries to explore feel as if they come too late to be properly discussed, and the way things are resolved feels way too clean and borderline offensive. These issues are not enough to ruin the season, at least for me, but for certain people, the material may prove too much for them to handle.

Outside of these issues, Season 3 mostly discusses its themes well. Self-care, passion projects, and personal satisfaction are the main themes of the show, and they feel as if they are properly handled (unlike the aforementioned themes in the ending). It felt as though the show was delivering a message that I connected to despite the show’s unconventional plot, and it is these kinds of realistic yet mature themes the show excels at. Hopefully, next season will build upon similar themes and refrain from the issues it faced this time around.

Aggretsuko‘s third season tries a lot of new things out, and for the most part, they work. With a more ambitious plot, new characters, and new themes, it feels as if this new direction they went with the show has great potential. Unfortunately, this comes at the cost of forgetting some of its original cast and having its story falter in different respects. That said, fans of the show will not be disappointed by this third outing, since it tries so much and gets most of it right. Like a karaoke performance, the show pushes itself to its limits in order to shine. In doing so, Aggretsuko pushes past its sour notes and ends up having a solid performance that is definitely interesting enough to warrant an encore.

For more news on Aggretsuko and other Netflix Originals, make sure to keep it locked right here at The Nerdy Basement. Consider supporting us on Patreon as well! It’s a surefire way to help us provide you with more Nerdy News!